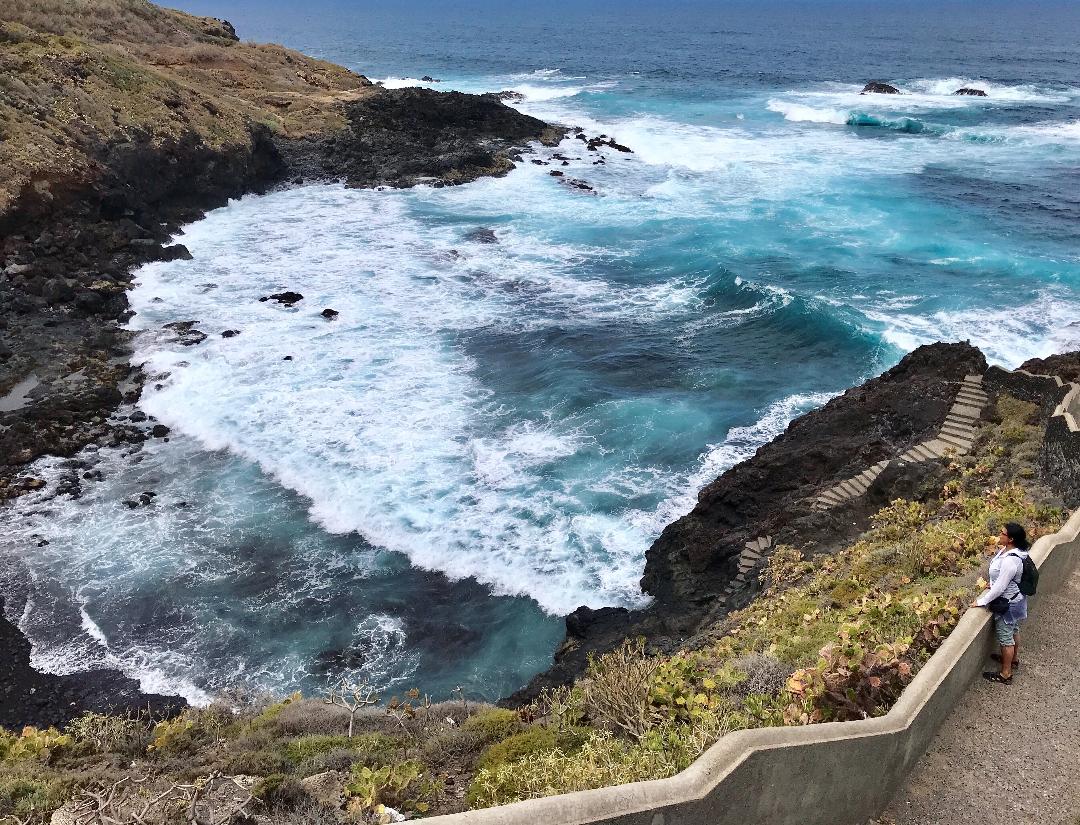 For a first time in my life I put a face mask on March 10, 2020, upon entering Madrid Barajas Adolfo Suarez Airport (MAD). I flew from the US to Spain on International Women’s Day to meet two of my best girlfriends in Madrid so we can spend together a week in Tenerife, Canary Islands. We are all native of Bulgaria. I live in the US, one of my girlfriends lives in Madrid and the other one still lives in Bulgaria. We didn’t see each other for years and the last time we traveled together was over 20 years ago. This trip supposed to be a lovely reunion and an escape from everyday’s hectic life. This trip supposed to be lots of fun! Was that the case? Yes it was. However only for the first three days of the trip.

I bet you’ve heard a lot about Spain’s cuisine. I couldn’t wait to try it! On my first day in Madrid, my girlfriends and I went together for dinner at La Chalana restaurant which was a seafood heaven. What an epic beginning of our girlfriends reunion!

On the next day, March 10th, we flew together to Tenerife with Iberia Express. We wore our face masks at the airports and throughout the entire flight. Upon arrival in Tenerife we were met by sunny skies and we were so excited about the upcoming six days of our trip.

On March 12th the World Health Organization announced COVID-19 outbreak a pandemic. The discomfort, worries and stress began to affect me and my girlfriends. We found ourselves abroad in the midst of a worldwide pandemic. We had to decide how to handle this situation, based on 3 countries travel restrictions. Should we leave right away? Should we stay and leave as planned on March 17th? How bad this situation can get? What we are going to do if they close the borders? For the next two days we were trying to find answers for all those questions. Also we were trying to get in touch over the phone with multiple airlines in order to change our air tickets with an earlier date, which turned out to be an impossible mission.

On March 14th, the pandemic panic took over Tenerife as well. People with megaphones started announcing on the streets of the island, “To stop the pandemic everyone should stay home. For you and for me.”

On March 16th, all flights from Tenerife to Madrid were cancelled. Travelers from all over the world were trapped in Tenerife with bars and beaches closed.

As of today, April 11, 2020, the quarantine is still ongoing worldwide – we don’t really know where our world is going and where we are going as humans and individuals. Our present reality is influenced, marked and scarred 100% by the COVID-19 pandemic. We can’t plan any aspect of our future, including travel and we feel lost, unsafe and stuck. Is this for real? When is all of this going to end? Are we going to go back to our normal life? Are we going to go back to our jobs? Is this world heading towards recession? What the future holds? So many questions remain unanswered. Meanwhile, we must keep moving forward, fighting, dreaming, hoping and believing, while simply doing our best during pretty bad times.

I’m thankful that I got a chance to spend some time with my girlfriends and to see another beautiful destination, even though the pandemic situation affected our experience abroad. I’m thankful that I still had a chance to enjoy and explore Tenerife for a few days and I hope to go back one day during better times on our planet.

Read my other post Traveling with Less: Travel Gear Guide

All year round. The archipelago is the warmest place in Europe in the winter.

HOW TO GET THERE

The Canary Islands are inexpensive 2 1/2 – 3 hours nonstop flight from Spain’s mainland and from most major European cities. The direct flight with Iberia Express from Madrid (MAD) to Tenerife (TFN) is about $80 RT. The nonstop flight with Iberia from New York’s JFK  to Madrid is 7 hours and you can  find an airfare as low as $260 RT. Usually you will get more affordable airfare if you book JFK-MAD and MAD-TFN separately. For Americans, the Caribbean is more convenient version of sun, sea and sand than Canary Islands since there aren’t any direct flights from the US to Canary Islands.

Keep in mind that Tenerife has two airports – Tenerife South (TFS) and Tenerife North (TFN), which is less crowded. There are more tourist amenities in the south and the weather is warmer. In terms of scenery and culture, the north is a better option. My favorite area in Tenerife was Los Gigantes (“The Giants”), which is a resort town on the west coast of Tenerife.

Exploring Tenerife by car is the quickest and easiest way to see the beauty of the island. Weekly rental in Tenerife cost us $90. Budget friendly rental companies are Autoreisen, Cabera Medina, Autopluscar and PayLess Car. You can drive around the entire island in about 3-4 hours. One of the most spectacular drives in Europe is on Tenerife’s TF-436 zig-zag road, which starts in Masca, a small mountain village in the western part of the island.

You can book luxurious apartment in Tenerife through AirBnb at a rate of $40 – $60 per night. Los Gigantes was my favorite area, offering spectacular views of the island. If you’ve never used AirBnb before, you can accept my invite to join and get $55 off towards your first trip.

The currency used in the Canary Islands is Euros. Tenerife is known as a bargain destination  for middle-class Europeans, mainly Brits, with good package deals including hotel and airfare. Everything in Tenerife is generally cheaper than on the European continent, and usually cheaper even than Spain’s mainland.

The food in Spain tastes amazing and it’s pretty affordable. Spain is a Mediterranean country, presenting Mediterranean diet, characterized with use of lots of olive oil and tons of seafood. Tapas are Spain’s most famous food, which refers to almost any type of Spanish food that is served in a small portion and shared between people when going out in a group. Spain has the world’s biggest vineyard and is among the largest wine producers in the world, selling wine for less.

MUST SEE WHEN DRIVING AROUND TENERIFE

1. MASCA is a breathtaking, small mountain village. The village lies at an altitude of 650 meters in the Macizo de Reno mountains and extends up to the northwestern point of Tenerife.

2. GARACHICO is one of prettiest towns on the island, which used to be the most important port on Tenerife. In 1706 when Volcano Montana Negra erupted, destroyed its harbour and ships docked elsewhere on the island.

3. PLAYA EL BOLLULO is a hidden gem, located in a secluded bay about four kilometers (2.48 miles) east of Puerto de la Cruz in the northern part of Tenerife. Playa el Bollullo is surrounded by dramatic cliffs and considered by many as the most beautiful beach in Tenerife. You can reach this beach either by car (for some part of it) or by walking for about half an hour the coastal path from Puerto de la Cruz.

4. PLAYA DE LAS TERESITAS is located in the fishing village of San Andres. Playa de Las Teresitas is an artificial beach and its sand was brought from the Sahara Desert. It is one of the few beaches that don’t have black, volcanic sand and it’s one of the most popular beaches of the Canary Islands.

5. PARQUE RURAL DE ANAGA is a stunning area of mountains and ancient forests. The area was formed by volcanic eruption 7 to 9 million years ago and has the highest number of endemic species in Europe.

6. PLAYA DE LA ARENA is a resort town, located just south of th resorts of Los Gigantes and Puerto Santiago in the Santiago del Teide municipality on the West Coast of Tenerife.

7. PARQUE NACIONAL DEL TEIDE is named for Mount Teide volcano and the highest peak in Spain. It was formed 120,000 years ago from a landslide caused by eruption of the ancient Las Canadas Volcano. The land in this site is among the most fertile on the planet, since the volcanic ashes give rich nutrients to the soil.  It was named Wold Heritage Site by UNESCO and is one of the 12 Treasures of Spain. This park had a spiritual significance to the aboriginal inhabitants of Canary Islands – Guanches. It was a place of worship for them and they thought of it as sacred mountain. Due to COVID-19 situation I had to leave the island earlier and couldn’t see and explore this fascinating site on our planet.

Our plan was to get on a ferry from Tenerife’s Los Cristianos and to visit for a day the nearby island of La Gomera. La Gomera is the second smallest of the main Canary Islands. They are two ferry routes operating between Tenerife and La Gomera – Fred Olsen Express and Naviera Armas. Due to COVID-19 pandemic we had to leave Tenerife earlier than planned and couldn’t experience this day trip.